Aaron was three years old when he was brought to Stem Cell Of America.

- A month after Aaron first received treatment, his mother wrote:

I have very exciting and wonderful news. Aaron’s seizures have diminished to just about zero. He’s gone from approximately 350 seizures a day to just a few, if any, each day, and those that he does have are not at all severe.

His sleeping pattern is much better as well. He is now able to sleep more each night without the constant waking-up pattern that my husband and I have battled for years.

All of Aaron’s therapists are amazed at his progress. His sleep patterns continue to improve as well. Before Aaron received the stem cells, he would wake up very often during the night because of having a seizure in his sleep. Then, after the seizure passed, he would be unable to go back to sleep. Now, if he does awaken, he can easily be rocked or gently moved a little, and he will go right back to sleep. This is a real miracle to be able to see him beginning to sleep normally. It’s a huge improvement.

In the past, Aaron would also have the most difficult time with his seizures when he was waking up. He would go into seizure for 15 to 20 minutes, and they were very intense. He would violently fling his head, arms, and legs. My husband and I were resigned to him doing so each time he awakened. We would try to allow him to go through this before we stimulated him too much, because that would only make his seizures worse. Now he is only twitching slightly when he wakes up and blinking his eyes a few times. This lasts for only a minute or two, and then he’s done.

I have even been able to start weaning him off one of his seizure medications. We are weaning him very slowly, but expect to have him off all medications in the near future.

Overall, my darling boy is much more alert, smiling more, interacting more, using his eyes more, and has much better head control.

- Several months later, Aaron was taken to his pediatrician for his annual evaluation. His mother wrote:

The doctor told me, “Aaron looks great!” He is now off of all medications. Previously the doctor had said to me, “Kids like Aaron never get better.” He told me there was no need for us to bring Aaron back to him. I nearly cried in his office, since never before had a doctor told us that we didn’t have to come back.

More exciting news. Today he got his new glasses. Pretty cool that he has glasses ... since his vision is coming back!!!! 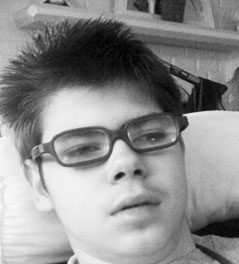 The only way that his vision could be coming back is if that part of his brain is regenerating.

In 1998 after viewing the CT and MRI scans of Aaron’s brain, the doctors at UCSF told us that the part of the brain that allowed for vision was destroyed-obliterated-gone... and that he would never see.

Finally, objective proof of the repair of my son’s brain. It’s like a miracle!!

All statements, opinions, and advice on this page is provided for educational information only. It is not a substitute for proper medical diagnosis and care. Like all medical treatments and procedures, results may significantly vary and positive results may not always be achieved. Please contact us so we may evaluate your specific case.